Mandela Day 2020 | The Meaning of Truth for Mandela

The Meaning of Truth for Mandela

On Valentine’s Day in 1994, three months before his ascent to the Presidency, the late Nelson Mandela took the podium as a free man to address the International Press Institute Congress.

Truth does indeed have immense power; yet it remains extremely elusive. No single person, no body of opinion, no political or religious doctrine, no political party or government can claim to have a monopoly on truth. For that reason truth can be arrived at only through the untrammelled contest between and among competing opinions, in which as many viewpoints as possible are given a fair and equal hearing. It has therefore always been our contention that laws, mores, practices and prejudices that place constraints on freedom of expression are a disservice to society. Indeed these are the devices employed by falsehood to lend it strength in its unequal contest with truth. The removal from South Africa's Statute books of the scores of laws, ordinances, regulations and administrative measures that have empowered government to abridge the rights of South African citizens to know the truth, or which repress the freedom of the media to publish, or which limit citizens' rights to express themselves are, in our view, essential for a democratic political climate.
-  Address by Nelson Mandela to the International Press Institute Congress, 14 February 1994

In an age of fake news and solipsistic world views, it is this legacy of the late Nelson Rolihlahla Mandela and his commitment to truth as an unfettered doctrine for democracy that we choose to honour on Mandela Day in 2020.

As Mandela noted, during the four long decades of Apartheid, “scores of laws, ordinances, regulations and administrative measures” were used by an oppressive state to undermine freedom of expression, and the right to question the government.

In 1950, the Suppression of Communism Act was one of the first to ban organisations and individuals based on their ideological affiliation. Extreme censorship became law in South Africa in 1963. Publications could be banned based on being deemed ‘undesirable’ and the terms of this were laid out in the Publications and Entertainment Act of 1963. The law did permit the right to appeal. This law was superseded by the Publications Act of 1974, which removed any right of appeal to the courts by the author or artist.

The catch-all term ‘undesirable’ sought to impose a distorted moralism upon the people of South Africa. This law is one of many promulgations that sought to control the population and suppress any dissent. Notably, the Newspaper and Imprint Registration Act of 1971 required that all newspapers declare their “intended nature and contents” and disclose the addresses and all previous associates of editorial and administrative staff. 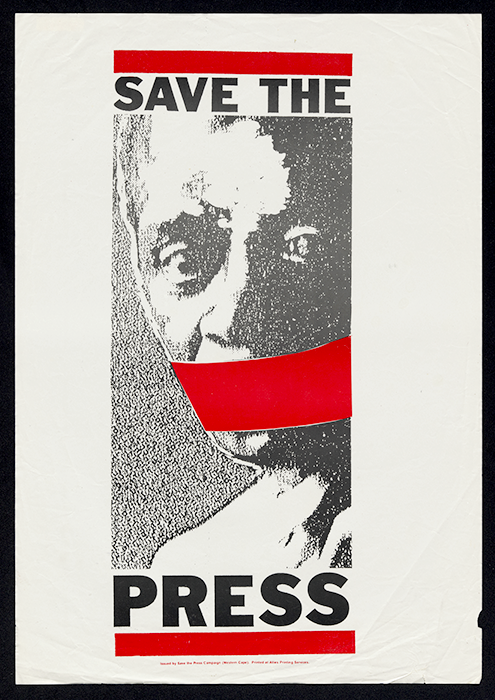 Image: Save the Press, published by the Cape Town Save the Press Campaign, 1989. UCT Special Collections African Studies Library. Visit the Primo record for this poster. 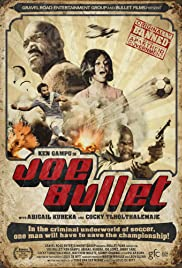 Many artists, journalists and photographers defied these laws, serving both the struggle and the creative appetite of the South African public. The B-Scheme Film Industry and its Retro Afrika film series demonstrated an effort to showcase local South African talent, but the contents of films such as ‘Joe Bullet’ were ultimately deemed ‘undesirable’ and banned. Read more about the Little Known Era of South African Film. 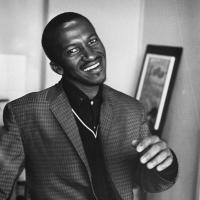 Photographers took tremendous risks to their own lives and livelihoods. One example is Ernest Cole, born in 1940, ultimately died in exile in the United States, after devoting himself to documenting the brutal reality of Apartheid for those most affected. Much of his body of work has been lost, specifically negatives for his publication “House of Bondage.”

Cole had worked and trained with iconic photographer Jurgen Schadeberg, who described him as being “brave enough to smuggle his camera into the tightly controlled mining compounds, and to click away at pass arrests with his camera hidden in a paper bag. His life was dedicated to showing the world the reality of Apartheid, and to bring image and light to tales of oppression.” - Learn more about Ernest Cole.
Photo credit: South African History Online 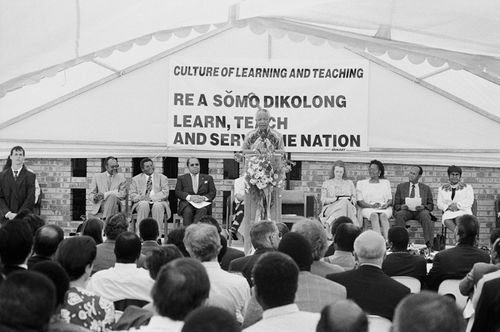 In the 1970s and 1980s, numerous photographers and journalists found ways to elude the censors. One powerful initiative included the Afrapix collective, which included notable South African photojournalists united in their opposition to Apartheid.

Between 1978 and 1990, this powerful group of individuals provided agency to the oppressed majority of South Africa.

Truth and freedom in a new South Africa

Sue Valentine, formerly of the Institute for the Advancement of Journalism, has argued that a “free and vibrant press” was one of Mandela’s “many cherished legacies.”

She further argued that this new powerful Fifth Estate was perhaps one of the forces that most “needled” the new ANC.

However, the principles of press freedom and freedom of expression remain enshrined in our Constitution; discerning truth from fiction, and fact from fake news becomes the responsibility of all people in South Africa in a post-Mandela world.